Some flowers have the ability to attract animals to carry out the so-called pollination, and those are the showy flowers. Through a simple process, they allow seeds and fruits to be produced, thus becoming exclusive flowers that everyone wants to get.

In many cases, the flowers themselves can emanate their perfume at certain times of the day to attract their dams, which can range from animals like birds and insects to meteorological phenomena like water or wind.

Definitely showy flowers attract attention for its spectacular colors and unusual shapes. In our online shop, we have a wide variety, ideal for decorating gardens and parks.

Crinum Luteolum: Yellow flowered desert Crinum native to dry, hot areas in South Australia. It is closely related to the white-flowered Crinum flaccidum. It is a beautiful compact plant, and it is rare in cultivation.

Koehneria Madagascariensis: A peculiar plant native of Madagascar with pink flowers that symbolize its “blood”. Koehneria belongs to the family Lythraceae and its spectacular color attracts insects for pollination. Amorphophallus titanum has managed to steal the heart of the lovers of rare plants.

This herbaceous plant became considered as the “largest flower in the world” at the University of Bonn (Germany) with a height of 2.74 meters in height and even got Guinness awards.

Original from Indonesia, it is also known as the “corpse flower” because of its particular smelly odor with which it attracts pollinating insects.

In fact, it is this foul odor that attracts pollinating insects to make pollen exchange and reproduce.

Its flowering is almost non-existent, since it only occurs three or four times throughout its life. In Canarius we are lucky to have the Crinum Lavrani, considered as the most wanted species within the range of showy flowers.

Its white and perfumed flowers fall vertically before opening and they do it from night until noon.

This herbaceous species from the low coastal forests of Madagascar appears mainly in the summer and its size ranges from 70 to 100 centimeters.

The exotic plants we have at Canarius are grown within greenhouses in different areas of Tenerife, where the use of chemicals is kept to a minimum. Some of our nurseries are completely organic, and others are energetically self-sufficient.

In our online store you can find all these types of showy flowers and many more, ¡Visit us! The name refers to the genus, Hoya, in honor of Thomas Hoy: gardener to the Duke of Northumberland at Syon House in Middlesex in the UK (eighteenth century). Although the species is also known as ‘wax plant’ or ‘porcelainflower’.

Hoyas are climbers, often with showy and exotic flowers, from the rain forests of Asia and Oceania. Most species need a dim light, but can also be grown as house plants.

They’re succulent plants that are very suitable for hanging baskets and trellises. They tolerate a few weeks of drought, but are sensitive to frost and cold.

This species includes more than 200 varieties of climbing plants of tropical origin (India, Malaysia, China, Australia…). The main species are: Hoya pauciflora, Hoya glabra, Hoya australis, etc., most of which we have on our online store of exotic plants: Canarius.

There are more than 200 different species of Hoya

Hoyas are thin stemmed shrubs. Their leaves are perennial, fleshy, dark green and oval. Furthermore, they have rather small scented flowers, white or pink with a red centre, displayed in compact hemispherical umbels and with a waxy appearance (hence its popular name).

Usually, these succulent plants bloom from spring to summer and the flowers last for quite a long time on the plant.

Hoyas usually live in tropical forests, and specifically in the trees. Most species are easy to grow, as they can grow in disparate and diverse conditions. These species can also grow in spongy soil organic matter, sand or other drainage materials.

At Canarius, we have numerous hoya species, we pack and ship them safely to anywhere in the world. See below some of our hoyas: 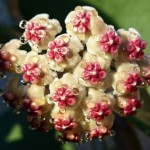 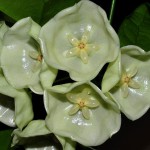 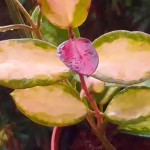 The commonly named ‘wax plant’ or ‘porcelainflower’ needs good light exposure, without receiving direct sunlight. They don’t resist cold, even less frost; the environment must be warm and the temperature no lower than 10 °C in winter.