Kasturi is not just another good-tasting cultivar of mango. It is a fully different species of Mangifera, from Kalimantan (Borneo). Some people say it is not a mango, it is a Kasturi! Fruits of Mangifera casturi are black-purple skinned, their flesh is deep orange, sweet and loaded with flavour and vitamines.

Kasturi is extinct in the wild and survived in cultivation 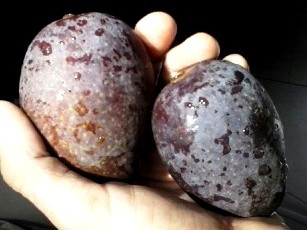 The species was unknown in the western world until a few years ago. It is sadly extinct in the wild, as Kalimantan forests have been extensively cut. It survived in cultivation around its native areas. The Banjar people of the South of the island hold these fruits in high esteem. No commercial plantations have ever existed, while they are grown for personal consumption by lots of private farmers-gardeners, since the wild harvest is no longer possible. The natural forest is lost forever and we can rescue only a slice of its original diversity.

Casturi mangoes can grow very tall and its hard to pick them. They do well in low altitude lands with alluvial soil and enough water. The fruits is consumed fresh and seldom processed in jams since fresh fruits are always in great demand by the Banjar. The rest of the world barely knew about the existance of this extinct-in-the-wild fruit and only a group of specialists in South Florida and in the Canary Islands became familiar with them.

To graft or not to graft Kasturi?

Yes! Unless you live in a deeply tropical everwet lowland, then you’d better graft it on Mangifera indica. This is because Mangifera casturi has delicate roots which are adapted to equatorial soil conditions. Non-grafted kasturi will take eons to grow and fruit in non-tropical areas. Their leaves often grow crinkled when it is not hot enough and the trees are sensitive to wind. It is a bit tricky to graft M.casturi on M.indica but we do it, and we graft them on the cold-proof mango rootstocks from Mangifera Gomera-1 and Gomera-3. This changes the whole world and allows the delicate equatorial kasturi to grow very well here in the non-tropical Canary Islands. Grafted trees are stouter, with darker, thicker, shorter leaves, they flush well even if not in summer and fruit much earlier and regularly. 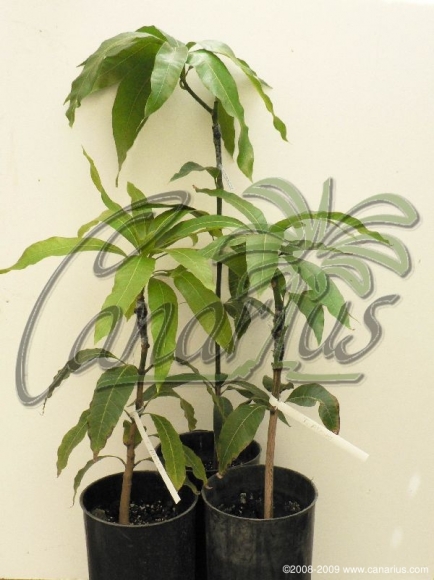 We have been leaders in disseminating Mangifera casturi throughout Europe, since we shipped the first grafted plants in 2016. So far, our plants reached lots of customers, mostly collectors scattered throughout Europe. It is by far too early to tell, but we got lots of positive reports from our clients. Quite a few have been planted outdoors in the best climates and now they are growing outdoors in Madeira, Southern Italy, Portugal and Greece. In the meantime, kasturi trees are becoming popular among collectors in Florida, since the team of Fairchild Gardens started to show and spread them.

Where did the Canarian kasturis come from?

They are the grandchildren of the Bajar trees ! In the late 1990′s Fairchild Gardens of Miami organised a collection of rare Mangifera species with lots of new seeeds and scions coming from the countries of origin. The team of Richard J. Campbell studied their growth and grafting. They  selected the ones that best thrived in South Florida.

Richard was in touch with Domingo Fernandez-Galvan, of the ICIA research center in Tenerife, who soon got backups of the best scions. Domingo grew them to maturity in the lands of the astonishing collection of fruits “La Cueva del Polvo”, held by the ICIA in SW Tenerife, in a mild, always dry, sunny and windless climate. Two kasturi trees grew huge and started fruiting but they fell into oblivion, both because they were not part of any research project of the ICIA, and because Domingo and other workers did not like the fruits, for being small, with too many fibres and a strong wild flavour. In one visit to the fruit collection, around 2006, Carlo Morici of the Palmetum de Santa Cruz tried some fruits Mangifera casturi and Mangifera laurina from the trees and fell in love with them. He got a box of fruits from Domingo and shared them with friends. Many found in that it was a new superior taste. Carlo convinced Domingo to give more attention to these wild species and Domingo soon organised a release of this new fruit tree with the help of Miguel, expert grafter, fruit grower and nurseryman of Northern Tenerife. Miguel had signed an official cooperation and could get a few hundreds of scions to make the first commercial sales and more mother plants for the future. Domingo passed away a few years later but thanks to him the orchards of Tenerife include hundreds of rare fruit trees, like kasturi and more.