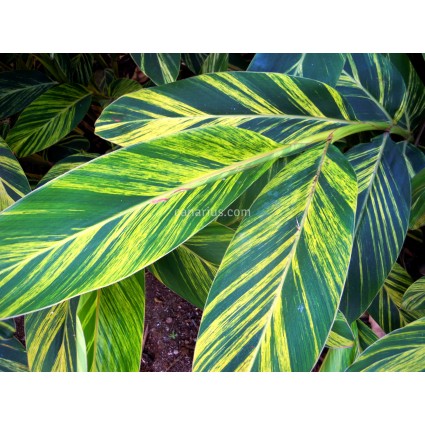 One of the showiest variegated plants in the world ! This Asian plant from the ginger family has large dark-green leaves striped in a rich yellow. Large plants will eventually bloom with a spectacular inflorescence of white and yellow flowers, reminiscent of orchids. This plant is used medicinally in a lot of surprising ways.

By buying this product you can collect up to 13 loyalty points.

One of the showiest variegated plants in the world ! This Asian plant from the ginger family has large dark-green leaves striped in a rich yellow. Large plants will eventually bloom with a spectacular inflorescence of white and yellow flowers, reminiscent of orchids.

Iti can grow outdoors in warm mediterranean conditions as it takes some cold and it will come back after light frosts. A temperature above 5 C is recommended for optimal winter rest.

We sell strong, field-grown, rhizomes with at least two active growing points.  Click THIS LINK and see how our Ginger and Heliconia rhizomes look like.

This study revealed that the rhizome aqueous extract of A. zerumbet has strong antioxidant and skin diseases-related enzymes. Since isolated compounds from rhizome of A. zerumbet, 5,6-dehydrokawain was identified as a moderated potent inhibitor of antioxidant and skin diseases-related enzymes. It has probable applications in preventing the skin against photo-oxidation. However further researches are necessary to use it as a lead compounds in drug designing.

(Excerpt from Natural Society. ) "Also known as light galanga, pink porcelain lily, shell flower, shell ginger, variegated ginger, butterfly ginger, yàn shanjiang in Chinese, getto in Japanese, and Sannin in the local dialect of Okinawa, the leaves and the extracted oils of the plant have long been used in Asia to relieve fevers and malaria, as well as to serve as a general health tonic. It is also used in South and Central America as a diuretic, antihypertensive, and antiulcerogenic.  Okinawa, Japan, whose population is frequently cited as ‘the healthiest on earth,’ boasts an impressively low incidence of cardiovascular disease, stroke and cancer. Here, the leaves of Alpinia Zerumbet are consumed regularly, very commonly used to wrap rice dumplings and decocted into teas. As is true of many traditional medicines, most of the people who consume Sannin have not researched or intensively studied the plant, but are somewhat aware of its general benefits, as a part of their culture.  Now, modern research has confirmed hypotensive and antioxidant activity in the leaves and rhizomes and extracts of the plant. It all comes together to show its potential benefits for diabetics, patients with atherosclerosis, and a wide range of skin diseases.  ..."