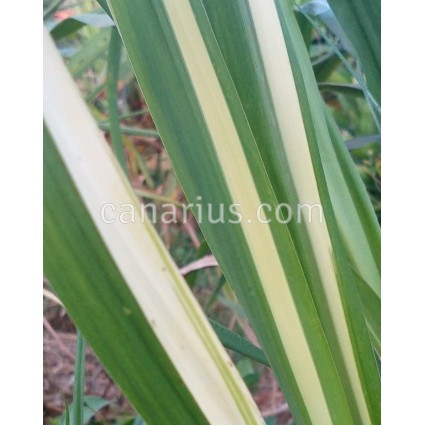 ‘Ie‘ie' is the Hawaiian name for the forest vine Freycinetia arborea, a climbing Pandanaceae with ribbon-leaves similar to those of sugarcane.
We offer a potted rooted plant.

By buying this product you can collect up to 21 loyalty points.

‘Ie‘ie' is the Hawaiian name for the forest vine Freycinetia arborea, a climbing Pandanaceae with ribbon-leaves similar to those of sugarcane. '‘Ie‘ie' is a Noble Cane variety that was originally exported from New Caledonia, and likely collected in one of the nearby island groups.As many other "noble canes", this ancient cultivar has a plethora of common names. ‘Ie‘Ie’ is the name in Hawaii but other names are ‘Cavengerie’, ‘Kava Rangri’, 'Altamattie', 'Po-a-ole', ‘Lousier’ in Brazil, 'Cheribon' in Australia, 'Port Mackay' in Mauritius.
It is a bordeaux-coloured with a defined bronze-green, almost black, stripe. It frequently givres variegated or albino shoots.nodes superficial, colour light reddish claret. Arrows high projected. Inflorescence are large and copiously branched, lushier than most other sugar canes..

The juice is less sweet than most other sugarcanes but it is a ' cool-hardy' cane, which grows well in the colder areas of the Sugarcane growing regions, including the higher elevations or the Mediterranean.
It is a red-wine-coloured cane with an inconspicuous yet clearly defined bronze-green, almost black, stripe, and possesses the peculiarity of not infrequently growing variegated or albino leaves.
It has been most extensively grown in Mauritius, in Brazil, and in Australia. Nodes are superficial, colour light reddish claret. Arrows high projected. Panicles large and copiously branched, very plentifully flowered.

Add to cart
Important Notice-Due to our long experience as exporters and importers, we inform you that all orders arriving after 7 November 2022 will be shipped after the second week of January 2023, to avoid any possible loss or delay in delivery due to excessive Christmas parcel traffic